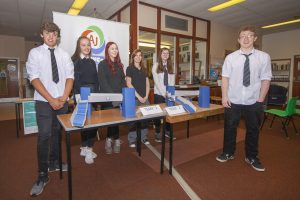 AJ Engineering has given young people an insight into the world of work by setting them the task of creating mini replicas of the Forres Railway pedestrian bridge.

Over 100 pupils from Forres Academy were set the task of building an exact copy of the bridge by AJ Engineering who were contracted to design, fabricate and install the actual bridge as part of the Aberdeen-Inverness Improvement Project.

The challenge, which saw them having to read plans, fabricate parts to exact measurements and build the bridge in cardboard was set for the induction of S5 pupils at the Academy.

Jazmin Kellas, quality manager for AJ Engineering took the lead on the task and said it was great to see how the pupils handled it.

She said: “We have a close relationship with Forres Academy and were delighted when they approached us to see if we could help with the S5 induction day. The brief was to set a challenge which made the pupils think about what future roles they may take on when they eventually get started in the world of work themselves.

“We decided on using the footbridge as firstly it’s a real project that is tangible for the young people and whilst we wanted to make it achievable, we also needed to make sure there was a very real challenge for the young people. The design itself is fairly basic, but there are quirky design features, so we thought it would be interesting to see how many of the young people picked up on those and made sure everything was put in the correct place and the right way round. The bridge is also two colours, so we kept that design element too and only gave them just enough materials. We tried to make it as lifelike as possible.” 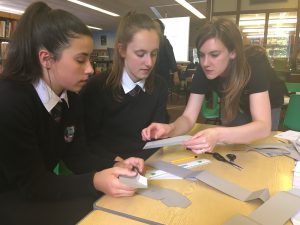 Jazmin Kellas, our quality manager assisting the pupils with their bridge.

Jazmin who has worked at AJ Engineering for a year was assisted by the firm’s graduate apprentice Laura Mair and the project manager for the footbridge Gary Moyes.

Jazmin added: “We ran three workshops throughout the day and the pupils were split into two teams. We showed them the actual drawings we worked to and explained how the process worked, then it was over to them to organise how they handled the challenge. It was fascinating seeing how differently each group approached it.”

Jazmin added: “Creating links with young people is very important to AJ Engineering. We have a vibrant apprenticeship programme and we were one of the first company’s in the north to employ a graduate apprentice. We also have a former Forres Academy pupil who is now at university working with us for three months over the summer. The whole day was a huge success and the pupils showed such enthusiasm for the challenge.”

Depute head teacher Sandra Mcculloch said the workshops were a huge success: “We are very grateful to AJ Engineering who put together an insightful and challenging workshop which truly gave the pupils an insight into the workplace and the different roles and skills that are required. It highlighted a number of core skills such as leadership, communication, problem solving and responsibility to name but a few.

She added: “The whole S5 induction event which we themed Bridging the Gap is really to highlight the change the pupils are making from compulsory education in S1-4 to S5 which they have chosen. Ill end up in the workplace whether that’s directly from leaving school, via college or university or an apprenticeship and our role today was to give them an insight into what will be required of them when they get there.”