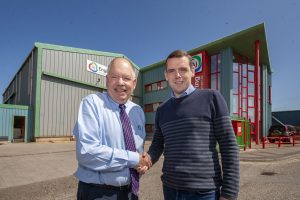 AJ Engineering has been highlighted as a Constituency Responsible Business Champion by the local MP.

The nomination recognises the firm’s work in the community as well as its working practices.

The nomination was made by Moray MP Douglas Ross and Alan James, managing director of the company which also has a base in Fort William said he was pleased with the nomination.

He said: “The company is delighted to have been recognised in this way. It’s a very worthwhile and credible award and there have been some very worthy local and nationwide businesses listed in previous years.”

Alan will now join Douglas Ross at an All Party Parliamentary Corporate Responsibilty Group reception at Portcullis House which is located next to the Houses of Parliament and is being held early next month to celebrate all the UK nominations and then hear who the eventual winner will be.

Speaking about why he nominated the company which next year will celebrate its 20th year, Douglas Ross said: “I am delighted to nominate AJ Engineering & Construction Services from Forres as the 2018 Moray Constituency Responsible Business Champion.

“Created in 1999 by Alan James the company has expanded from just one employee – Alan, himself to becoming one of Scotland’s foremost steel fabrication, steel erection and cladding specialists.”

He added: “What has particularly impressed me is that along with achieving this commercial success, the company has always recognised the value of employing young people and providing apprenticeship opportunities. Traditionally AJ Engineering has taken on two modern apprentices a year. In the last three years, this has increased to three. Not only that, but last year the business took on its first graduate apprentice and is now looking into taking on its second. By bringing young, enthusiastic people into the business the company is helping to prevent the “brain drain” from the local community.

“AJ Engineering also provides support to the Forres Academy Engineering Club.  Members of the club have visited the premises to conduct interviews with staff on what is involved in engineering and also had a look around the engineering environment.  The company even ran three workshops during which the pupils had to make mini cardboard replicas of the new Forres Railway footbridge which was built by AJ Engineering. This provided an excellent introduction to the world of work and the opportunities that exist in the engineering sector. I am very pleased that Alan has accepted my nomination of AJ Engineering and I look forward to welcoming him to the celebratory event that will take place in Westminster next month.”