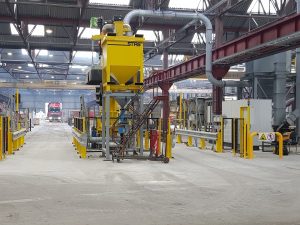 The TAC unit at Liberty Aluminium

AJ Engineering has been chosen by contractors to handle two installations for international firms.

The works took place on behalf of Fort William-based firm, Liberty Aluminium and James Jones & Sons of Forres and involved companies from Quebec in Canada and San Francisco in the United States.

Overseeing both projects was fabricator/welder Andy Watt who explained: “The very reason these two customers have chosen AJE for these install-only jobs is because of the high standard of workmanship that our team can provide.

“In both projects the materials were shipped over and it was down to our team to handle the installations.

“The work at Liberty Aluminium involved installing a new TAC unit on behalf of Canadian company STAS. The work is now complete, and we have received great feedback from the Liberty team. We have a very good relationship with Liberty and the six-week installation went very well. Initially there was a representative who came over from Canada and we worked closely with him. It was an interesting project – made even more interesting by the fact that everything was done with imperial measurements so there was a lot of conversions happening.”

He added: “The work at James Jones is on-going and it’s great to be on site there. The project there is the installation of a new production line which represents a great expansion for James Jones. Again, everything is going well.”

Earlier this year, AJE was contracted by Hardie Engineering, to fabricate and install a new steel framed building and cladding at James Jones, a timber processing facility.