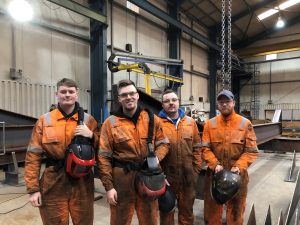 Nigg Skills Academy is a not for profit company which opened in March 2012 to address the shortages in the key skills of fabricating, pipefitting and welding within the energy industry. The organisation works with key employers and industry qualifying bodies, the academy has developed vocational qualifications to meet these increasing industry demands.

Graham Alexander said: “This is the first time that AJE has engaged with one of the programs that Nigg offers and the four trainees have completed their training and now have the opportunity to demonstrate what they’ve learnt and continue learning on the job .”

He added: “AJE has a history of investing in young people, but until now they have tended to be school leavers who come in on our apprenticeship schemes. However, this new collaboration has allowed us to take on employees who are looking for a change of direction from their existing careers or jobs and give them an opportunity to learn a new skill.”

Josh Smith (21) said he was delighted with the process: “I had been in the merchant navy but found it wasn’t for me. I had some experience in welding, but when I saw the job advert for AJ Engineering jumped at the chance. There was lots of practical work on the course which was great and the advantage for the four of us, was that we knew we had secure jobs at the end of it.”

“Garen added: “I had been working with a hydraulic firm in Elgin as a labourer but there was no guarantee of being able to progress, so like Josh saw the opportunity here. The team at AJE is great, everyone gets on and it’s great that after completing the course, we can walk straight into a job and put what we have learned into practice.”