AJ Engineering has employed a senior quantity surveyor which is the first post of its kind in the company’s 21-year history. 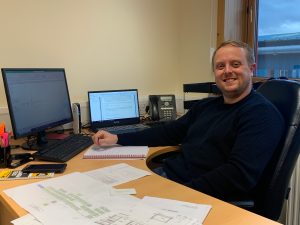 Lee Shylan joined the company at the start of December and the role was created as the company continues to grow.

Hailing from Aberdeen, Lee joined AJ Engineering after returning from New Zealand where he worked for four years for John Jon

es Steel as a Quantity Surveyor/Estimator.  JJS is one of the country’s leading structural steel fabrication and erection companies capable of delivering 4200T projects.

Lee said: “My role here will be to support the project managers with some of the financial and contractual aspects of projects.  It’s a new role for AJ Engineering, but ultimately, I am here to take a bit of the burden from the project managers and allow them to concentrate on managing their projects.   A Quantity Surveyor can also assist with improving project margins and managing risk for the business.  I was attracted to AJE due to its diverse clients, expansion plans, forward thinking culture and its involvement in the renewables sector. I like the company ethos and it has a great structure and want to be part of their journey.” 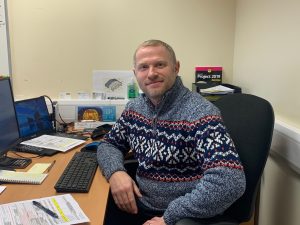 Rob joined AJ Engineering after a career in the army.

He retired as a Regimental Sergeant Major in 2018 from 39 Engineer Regiment situated at Kinloss Barracks.

He had previously made contact with AJE when he left the army in 2018, so was delighted when he was approached to join the team in November.

He said: “After leaving school, I worked for 18 months for a sheet metal work company and then joined the army where in my early days I trained as a welder.

“Since leaving the army, I have been employed within a number of roles in operations/project management and project engineer. I was delighted when approached by AJ Engineering when a Project Engineer role and opportunity arose. I am really enjoying the role, due to how diverse each day can be. I have had a mixture of office and site work so far, which suits me down to the ground, as I love getting my hands dirty too. I am really excited for my future in the company and the new challenges that lie ahead.”