Schools out for all weathers 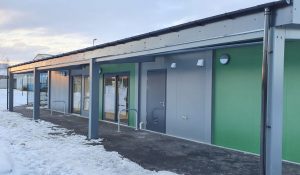 Pupils from five primary schools across the Highland region will be able to play and learn outside in relative comfort thanks to a project handled by a team at AJ Engineering.

Working for Morgan Sindall on behalf of Highland Council the scope was to provide five primary schools with extension canopies.

Three of the five canopies have now been completed and it is hoped that the final two will be completed this month.

Project Engineer Rob Williamson led on the project which involved using the workshop at the Greshop in Forres alongside the new multi-million pound premises at Waterford to fabricate the main steel canopy frames.

Rob who joined AJ Engineering last October said: “This has been my first full project(s) with AJ Engineering and it’s going very well. We were given architectural drawings from the customer and Pat and Alan worked from these. Pat designed the main steel canopy structure and Alan designed the cladding canopy roof. There are five schools and whilst each canopy design was similar, each site was different regarding canopy dimensions and finished colours, so each school had to be treated as individual designs and projects. The designs were then fabricated in the workshops and taken to Elgin to be galvanised and they were powder coated in Cumbernauld. That in itself took a bit of logistics.”

He added: “We then had to hire a specialist vehicle to use on site so that we could lift the steel columns into position. This is the first project that I have worked on in its entirety and I am pleased with how it has gone; I give a huge thanks to all those in the team who have helped me along the way.”

The three school sites which have been completed are: Obsdale in Alness, Auldearn and Ardersier. Kirkill near Inverness and Duncan Forbes at Culloden are expected to be finished mid-March.