Water project draws to a close 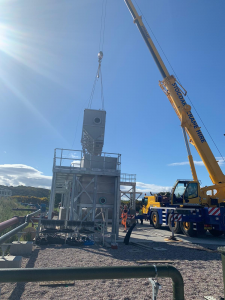 A long running project on a new Waste Water Waste Treatment Plant at Ardersier is drawing to a close.

AJE has been involved in the development for Efficient Service Delivery on behalf of Scottish Water for the last two years.

Scottish Water had to seek revised planning permission for the development to the west of Nairn and now that has been successful, a team from AJ Engineering has been on site to install all the access steel work and the equipment for the new Inlet Package Plant being lifted into place.

The new WWTP is being put in place due to population growth at Tornagrain near to Ardersier as project manager Wilson Burnett explained: “It was forecast that the existing population of 3,000 in that area would rise to 8,000 with all incoming flows attributed to domestic flows from the new Tornagrain Village and the surrounding areas so there was a requirement to install a new Waste Water Treatment Plant to serve the area.”

He added: “As well as the access steel work, we have previously been involved in the fabrication of all the pump skids and five stainless steel open tanks to be used as part of the flow controls on site.”

Working on water related projects has become a speciality of the AJE team.

The company has also just secured three contracts all for the same site at Huntly. 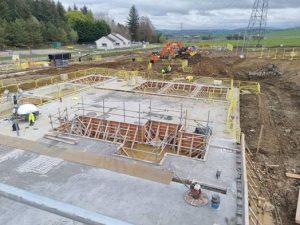 The site at Craighead

The Water Treatment Work is supplied from Craighead Raw Water Reservoir which receives its water from a spring water capturing system and also a Raw Water Pumping Station at the River Deveron.

In 2014, it was recommended by the Drinking Water Quality Regulator for Scotland that the site was not of an acceptable standard and as there was not sufficient space to expand the site at the existing WTW, a decision was taken to build a new plant nearby.

Wilson explained what the latest contracts involve: “The three contracts are for the fabrication and installation of 10 Treatment Process Tanks, there is a mechanical and metal work contract to carry out a site install, including the supply of all the internal stainless-steel pipework along with all the access steelwork and the install of the free issue equipment and valves from the client. The final contract is for the building steel and cladding to house the new Water Treatment Works.”

Graham Alexander, director of AJE said: “We are delighted to have been able to provide further services to ESD. It’s great for AJE to be getting repeat business in this way and it’s a testament to the quality of work that our team can deliver.”

With a number of projects currently active with ESD some of them near to completion and some of them just at the award stage, most of these projects are based in the North and North-East but there are works further afield as well.