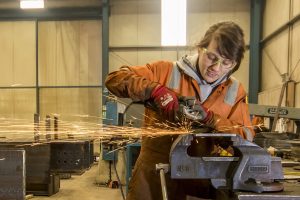 Bethany as an apprentice

Bethany Stuart-Bass joined AJ Engineering six years ago as an apprentice fabricator welder but now the 30-year-old is responsible for ensuring the new equipment which was installed as part of a multimillion-pound expansion runs efficiently.

Bethany, who previously featured in the national press to promote AJE’s commitment to employing apprentices and trainees said she was delighted to take on the responsibility.

“I am grateful for the opportunity and I am learning a lot. Being asked to be involved in this huge development for the company is an acknowledgement that I am capable. Graham and Alan have always invested in trainees and apprentices and they are very forward thinking when opportunities like this arise within the company.

“I am working alongside Martin Kemp and between us we will ensure that the machine runs how it should.” 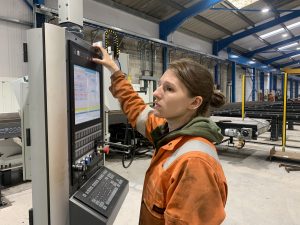 She added: “It’s been a huge learning curve, but we have been involved from the start. We were there for the install, the training and now the running of the drill and cut line. I really like to learn new things, so this has been a fantastic opportunity. We were given really intensive training and there was a lot to take on board. However, the machine is now up and running fully and has already manufactured quite a few tonnes of steel beams and angles for contracted jobs. It’s a great piece of kit.”

The installation of the equipment is part of the £2.5 million development at AJE’s Waterford site.

The fully automated equipment which was imported from Italy carries out the marking, drilling and cutting tasks on long steel sections allowing our skilled work force more time to focus on complex fabrications.

In March, The Micron told how AJE former apprentice Lee Evans became the foreman of Waterford.

Speaking at the time Lee said: “I did dream of one day progressing through the company and I have always wanted to better myself. I am doing it for my family and my eldest son is proud of my new position. I think having been an apprentice I can help the guys I work with better. I have been there and I know what it’s like. I have been in their shoes. That said, I am also learning every day. There is never a day where we don’t all learn something new.”