AJE puts mosaics in the frame

AJ Engineering has played a part in a new trail which explores Wester Ross’s importance to Arctic Convoy efforts during the Second World War.

The pictures show one of the aluminium frames that were designed, fabricated and installed by our teams to display three mosaics designed by local pupils.

The Blazing a Wartime Trail around Loch Ewe was officially opened at the end of August at MacLennan Park in Aultbea.

The event was attended by those involved in the project and local school children.

AJE director Graham Alexander said: “AJ Engineering is involved in so many different types of projects from designing, fabricating and installing huge items for bridges, buildings and renewable energy sites, to jobs like this one, which are smaller but still so important to our clients and our team. It was such a pleasure to work on this. Seeing the finished mosaics is the icing on the cake and they look absolutely beautiful.” 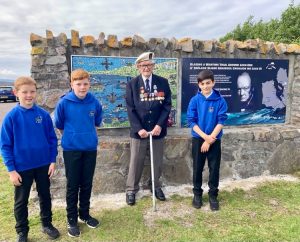 Loch Ewe served as a strategic point for the Arctic Convoys. Between 1941 and 1945, vessels made the perilous journey from the area to the ports of Archangel and Murmansk to deliver essential supplies to Russian allies. Sailors faced horrific conditions along the way, including extreme temperature plummets.

Nearly 1,500 merchant vessels were involved in the convoys and more than 3,000 men died.

Pictured is David Craig, a veteran of the Arctic Convoys, alongside pupils of the nearby Bualnaluib Primary School.