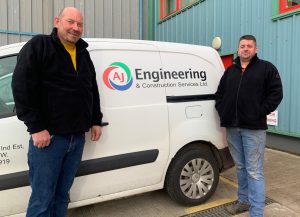 A TEAM from AJ Engineering will be working on their most remote job to date when they travel to Antarctica for a new project.

Twelve workers will be working at the British Antarctic Survey’s (BAS) remote Rothera Research Station, where temperatures can plunge as low as -34C.

The team of cladders and steel erectors will be working on behalf of client BAM Nuttall who have an ongoing relationship with BAS and recently secured a 10-year, £500m contract to upgrade and extend their polar research stations.

Leading on the project are steel erectors and cladders Ross Jack and Paul Briggs who are due to leave Forres this month on the 8000-mile journey which is expected to take over 20 days to complete.

A team of cladders have already begun travelling to Rothera which includes a 14 day isolation period and a 25 day journey on the UK’s newest polar exploration vessel, the RRS Sir David Attenborough.

The 129-metre icebreaker is operated by BAS and is one of the most advanced polar research vessels in the world. It is built to accommodate a multidisciplinary scientific team.

The team will spend at least six months at Rothera and will carry out various tasks including erecting steel and installing the cladding on the new ‘Discovery Building’ which will replace the current science and operations building.

Paul Briggs (46) and Ross Jack (43) explained how they were feeling about the experience.

Ross said: “I am excited. How many people can say that they have been able to go to Antarctica? I’m a former soldier so I am used to being away from my family and that type of thing. I am not worried about the work at all.”

Paul added: “I am up for the challenge. AJ Engineering is used to taking on projects in remote locations and this is taking it to the next level. That said, we couldn’t be doing this without the support of our families, but it’s going to be an extraordinary experience.”

The team have had to undergo extra training in personal survival techniques and also undergone stringent medical and dental checks.

Their deployment to Rothera is the start of a three-year project for AJ Engineering.

Graham Alexander, director at AJE said: “It’s absolutely fantastic to be involved in a project of this scale particularly with regard to the station’s work on climate change. The significant work BAS carry out at Rothera has an impact worldwide.”

He added: “Like all projects in remote locations, it’s the amount of pre-planning and logistics that make the difference between success and failure. We are very lucky to have project engineer Rob Williamson working with us. He is a former regimental sergeant major with the Royal Engineers and it’s those skills that have been brought to the fore in the planning of this project. AJ Engineering has extensive experience in working in remote locations, this one, is just that little bit further afield. The team that are going are extremely skilled and have taken all of the training in their stride.”

It is not the first time AJ Engineering has been involved in a project in Antarctica.

In 2017, the company was contracted to create a steel platform which was installed on Bird Island, South Georgia in Antarctica.

At that time, no employees were sent to the location but instead carried out a mock-up of the installation with contractors BAM Nuttall.