Following on from my last blog, I thought I would in introduce you to some of our fellow travellers  – Alan and Andrew aka The Doc. 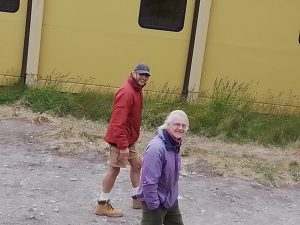 Alan is pictured in the red jacket.

I’ve not got Alan’s story yet but I have managed to get some information from Andy by talking through the window as he passes on his exercise lap. The conversation and information was gathered over two days. This is how we do things in quarantine.

Andy as he likes to be called is a bit like the doc out of Back to the Future with his white hair, but make no mistake he is no mad scientist but one of the world’s leading experts on ice sheet glaciers and their role in earth systems with the application of geophysical methods to understand the current state of/change in the cryosphere. 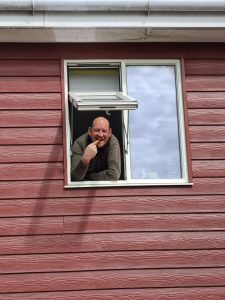 Paul chatting to others from his ‘isolation’ room

This summer in Antarctica, Andy was telling me he is going to the heart of the continent which takes a small plane, three stops to get fuel to reach his destination.

Once there, he is going to do a seismic investigation of subglacial lakes which are liquid water lakes under thousands of meters of ice. I asked him how many meters deep and he thinks it’s around 2700 or so but he won’t know till they get the data back. They are trying to determine if there is liquid water in the lake and if there is a good depth, they will be looking to drill into it in the future.

Now, cause we all have a lot of time on our hands and I’m genuinely interested I asked the doc why they are investigating this. Basically, they want to see if the liquid water has enough depth for life to exist in deep frozen lakes that have been cut off from the world for thousands of years. The water in these said lakes could possibly exist from the super continent Pangaea and as it turns out you can find out a lot from a bit of water under ice.

This morning, I asked Andy how they do their research, and it was pretty explosive. They use 25kg dynamite!!! They set the dynamite on the smooth depression in the ice which is how they know there is a lake underneath. They set up various probes and sensors, attach them to a fancy laptop and set the dynamite off. From here, they read the shock waves through the ice. All this data is collected and when they get back to Rothera, they send it all back to Cambridge where it gets analysed when Andy returns!

However, this is where the AJE team come in. The new Discovery Building which we will be working on, will be state of the art and this will give Andy and his team the ability to start analysing the data straight away, giving them far better and quicker results. Interesting!