Historic works get “cherry on cake”

Work on a historic building in Forres has been completed with two replacement replica turrets being the “cherry on the cake.”

AJE was contracted to replace two roofs on the Forres drill hall.

Designed by Charles C Doig in 1909-10, the complex which is also known as the Forres Joint Cadet Centre comprises several buildings including a rifle range and classroom which are the two buildings that AJE renovated.

However, the scope for the works expanded when the turrets on the buildings had to also be replaced as 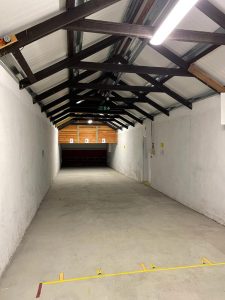 Project Manager James Attridge explained: “It’s been a great project working on something so local. The turrets were not originally on the scope, but because it is a listed building, it was decided that the turrets had to be retained. However, when they were removed in order for the roofs to be replaced, they literally just fell to bits.

“However, we were able to create replicas and complete the job and seeing them go on, which was the final part of the project really was the cherry on the cake.”

James added: “It’s a great project to be working on as the building is historically important to the town. It’s been fascinating getting to see it. As well as replacing roofs, also demolished two brick lean-to extensions to the rear of the drill hall.” 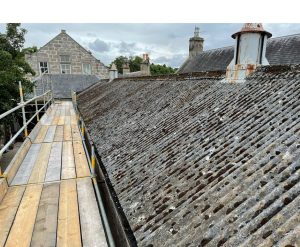 Forres Joint Cadet Centre was constructed shortly after the 1908 reorganisation of the Territorial forces, brought about by the Territorial Forces Act 1907. An Aberdeen Journal newspaper article from 1907 reports that a bazaar was held to raise funds for a drill hall for A and H Companies of the 3rd Volunteer Battalion Seaforth Highlanders. The building was officially opened in March 1910 by Brigadier-General Forbes Macbean and cost around £1300 (Aberdeen Journal, 1910).