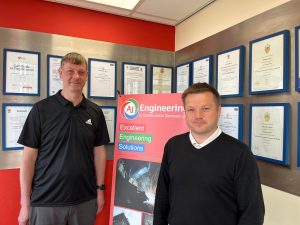 Two new project managers have started at AJE to meet increased demands on the firm.

Kevin Smith and Andrew Fyvie have joined the company and both said they are enjoying the variety of works that AJE secures.

Kevin came to the Forres HQ from R&M Engineering in Huntly as he wanted to expand into different sectors as he explained: “I just fancied a change. R&M Engineering specialise in the oil and gas sector and they are very good at it, but I wanted a new challenge in a different industry and AJE is providing that.”

Kevin (44) who lives in Buckie with his wife and has four grown up children has thrown himself into the job and is already working on several ‘bridge’ projects.

He is a time served fabricator/welder and started in project engineering in 2012.

“There are a number of bridge projects underway which I am involved in,” explained Kevin, “looking at the history of AJE, it is not surprising as it seems to be something of a specialty for the company. The projects I am working on are all very different and are all in very different locations with one actually being just a five-minute walk from the facility at Waterford where the steel will be fabricated for the project. That project in itself is proving interesting due to the location.”

Andrew is enjoying the variety of the projects too. He had been working for BAE Systems in Glasgow doing mainly design work.

However, Andrew who lives in Elgin with his wife and two young children explained he wanted a change: “I enjoyed my role with BAE Systems but it was very desk orientated. I wanted a job where I could get out and about and be able to see a project through from start to finish and AJE is providing that for me. Before I was with BAE, I was previously a project support engineer based at Glenfiddich Distillery and I really wanted to get back to that type of role.”

Like Kevin, Andrew is working on three key projects, one in Forres, one in Skye and another in Inverness.

“It’s great to be able to get out and about, meet the clients and be more hands on with the projects. I am now involved in the whole process and that is really fulfilling.”