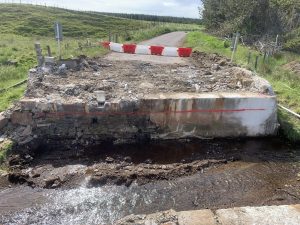 The bridge site at Dykeside

This month, teams from AJ Engineering are expected to be on site to supply and install two bridges which are part of Moray Council’s £1.7m road and footbridge spending plan.

As with any projects, the team have had to be flexible as the planned schedule of works had to be changed as project manager Kevin Smith explained: “The bridges are just five minutes apart and although they are very similar, they are being treated as separate projects. It was planned that the Dykeside Bridge would be the first to be replaced, but when it was removed by the client, it was found that the original abutments that they had hoped to build upon were in a worse state of repair than first thought. Story Contracting are going to do the additional works required before we can then get onto site.” 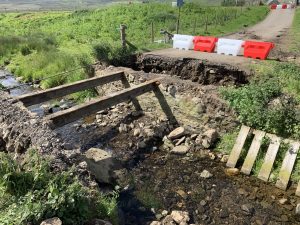 Kevin added: “All it means is that we have moved the replacement of the Aldunie bridge up and it is hoped that we will be on site by July 6 with the Dykeside Bridge hopefully following shortly afterwards. Each bridge should take about three days to be installed.”